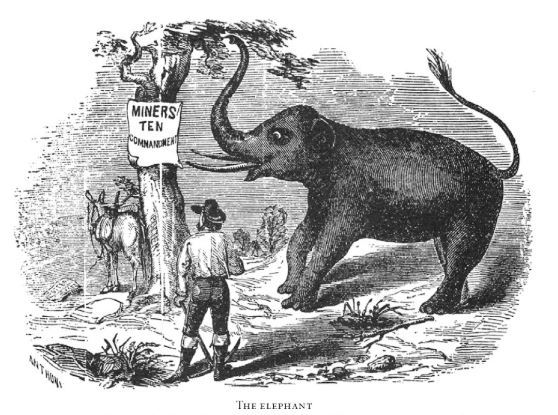 "To see the Elephant" is a phrase with debated origins. Regardless of the origin of the phrase, the usage thereof is not debated. The use of the expression was common during the American antebellum years. The exact meaning of the term is somewhat malleable. In general, the concept was that a traveller would see something exotic and unusual. Later this term took on an additional connotation, as it became more appropriate for the true experience of the Gold Rush. Similar to seeing a real-life elephant, the anticipation would often prove overhyped, resulting in a disappointment. This fit with the Gold Rush perfectly, as once the majority of travellers reached California, they found neither gold nor wonder.[2]

One author further defined the phrase as meaning, "When a man is disappointed in anything he undertakes, when he has seen enough, when he gets sick and tired of any job he may have set himself about, he has 'seen the elephant.'"[3] Another author said that "to see the elephant meant to face a particularly severe ordeal, to gain experience by undergoing hardship, to learn the realities of a situation first hand, or to encounter the unbelievable."[4]

Though it may have been used in other contexts, by far the most common usage of the term was in describing the gold rush, particularly the overland journey.[5] Oftentimes, sojourners (such as William Murray specifically) would encounter retreating travelers and chalk their retreat up to having "seen the elephant."[6] 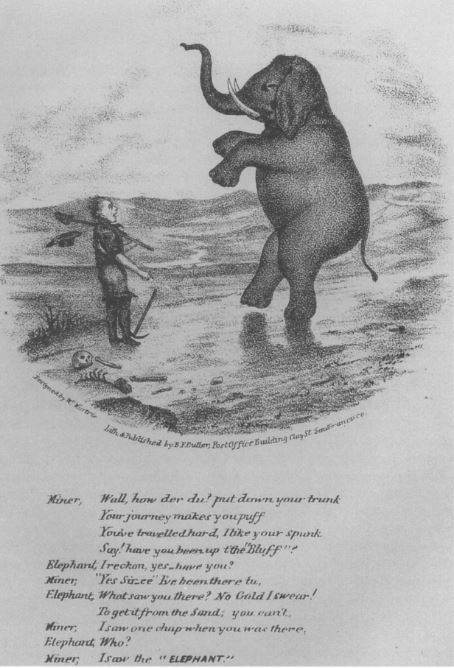