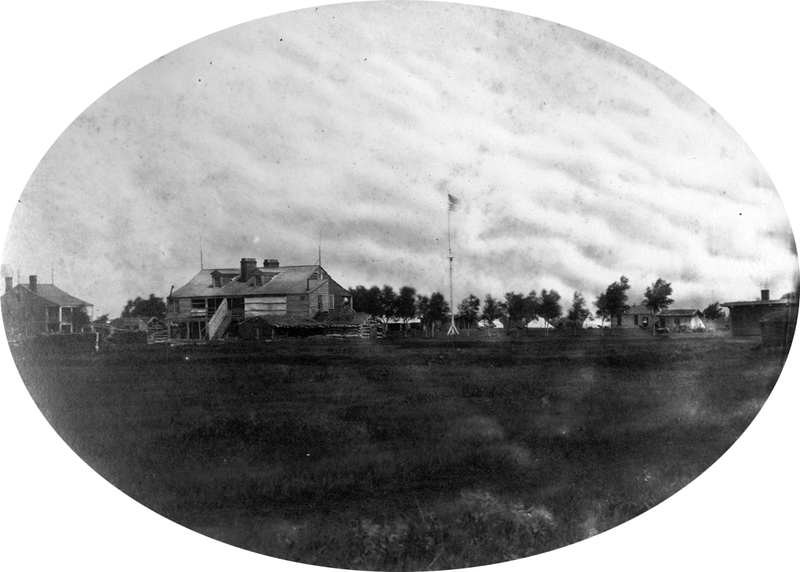 Having been established around 1846 specifically for the purpose of accomodating and protecting westward travellers, Fort Kearney was originally named Fort Childs. However, in 1848 the fort was renamed "Fort Kearny" after then-Colonel Stephen W. Kearny.[3] The name was so commonly misspelled by Postmasters and others that the incorrect spelling of "Kearney" became more common in print than the correct "Kearny," establishing a precedent that became the rule.[4]

After its official incorporation into military use, the fort became one of the most common stops for westward travellers in the Gold Rush as well as those travelling to the Oregon Territory to claim lands. Serving as a "way station, sentinel post, supply depot" and reliable mail center, Fort Kearney was one of only a few sights that might have brought some form of relief to travellers along their way.[5]

While some travellers did utilize Fort Kearney for sending and receiving mail, Amos Bargdoll being among them, others arrived at the Fort only for the spectacle of it. William Murray, for instance, writes of his experience, "at noon arrived at the Fort. When in and about the fort looked at it, and then went back to the waggon [sic]."[6] For some, although this fort was rather unimpressive as a structure or military site, it was one of the first places that they might have been exposed to thousands of people coming and going in such a manner.

[1] This, the first photo ever taken of Fort Kearney, was taken by Samuel C. Mills in June 1858. Interestingly, it depicts a fort that was clearly intended to be utilized openly, rather than as a fortified site for munitions or militaristic purposes. With no fortifications of any sort, excepting some small fences, the fort appears to have been more of a trading post than anything else.

[6] "William Murray Diary," Friday June 8. Amos Bargdoll kept a log of the mail that he sent while on his trip on the first page of his diary. His log indicates that he sent one letter to Nancy Bargdoll on May 30 from Fort Kearney.