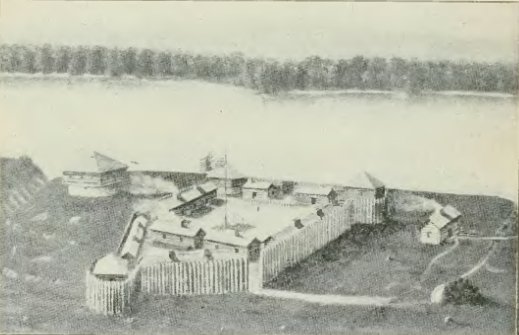 Fort Madison, Iowa, is mentioned in William Murray's Gold Rush diary as a stop during his journey westward.[2] Records indicate that there would have been no fort standing on the site at the time of the Gold Rush in 1849. The name was maintained by the inhabitants of the city.[3]

Following the Louisiana Purchase in 1803, the United States authorized explorers like Meriwether Lewis and William Clark to begin exploring and mapping out the newly acquired lands west of the Mississippi River.[4] One explorer authorized thereafter was Zebulon M. Pike, who set out exploring the upper Mississippi valley. Pike was dutied with dictating a location upon which to establish a military outpost to serve the initial push to the western expanses. He was also to consider the Mississippi River and its importance as a trade route for the Americans, French, and English. In 1805 he wrote in his report back, "I have chosen a site on a hill forty miles above the river De Moyen (Des Moines) rapids, on the west side of the river. The channel of the river runs on that shore; the hill is about sixty feet perpendicular, nearly level on top."[5]

Once the fort was established it came under attack by Native Americans led by Black Hawk almost immediately. The Sauk (or Sac) Indians believed that the fort was built on land that had not been sanctioned for building by the Native Americans in the region, even including lands that they had agreed to allow American settlement on under previous treaties. Attacks on the fort continued in almost perpetuity from 1809 through 1813 when American forces, under seige and expecting no reinforcements, abandoned and set fire to the fort as to keep it from being utilized by the Natives.[6]

By the time of the Gold Rush, the "fort" was replaced by a well-inhabited city that included a courthouse (now known as Lee County Courthouse) and a penitentiary.[7] This indicates that the city would have been a fine place for travellers such as William Murray to replenish their supplies, send or receive mail, and summon strength and resolve for the long trail ahead.

[1] This image, which is an artist's rendition produced in 1903 depicting what Fort Madison looked like in 1808 upon its completion. This image was published in Volume I of Benjamin Gue's History of Iowa which is cited below, and is available online through Google Books.