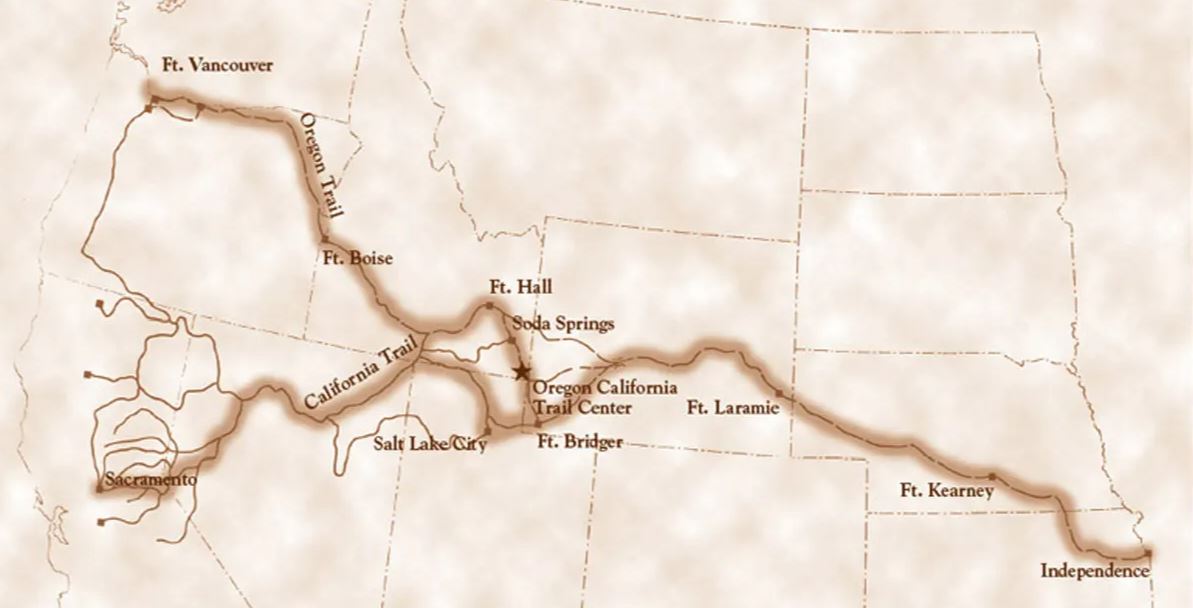 The Oregon/California (OC) Trail was the most prominent route to the West from 1841 until the outbreak of the Civil War. Expanding across 2,000 miles, the OC Trail began at Independence, Missouri and continued to the Columbia River Valley in Oregon or in the gold fields of California. [2]

A trail west was originally plotted out, in large part, by Meriwether Lewis at the behest of President Thomas Jefferson in 1803. [3] Over the next three decades, work carried out by the Pacific Fur Company, North West Company, and the Hudson Bay Company brought the trail to prominence and firmly set the trail's parameters in order to maintain trade with the American states as well as British tradesmen in what is now Canada, and French tradesmen in what would later become the Louisiana Territory. [4]

With the trail established and well-trodden by the emigration of Mormon's westward as they fled legal prosecution, the way to the west coast was known and could be accurately followed by the time that the California Gold Rush erupted in 1848. As a matter of fact, James Marshall, who was the first to discover gold at Sutter's Mill in January 1848, was a former Mormon that had been a part of the Mormon Battalion discharged in San Diego. [5]

After the news of gold being found in California was spread across the east coast, over 120,000 people crossed over to California alone by the CO Trail. [6] This was not an easy route, as death on the trail was a constant reality, and there was also a constant threat of violent engagements with Native Americans instigated by either side.

The trail was utilized by the Pony Express from 1860-1861 as a route to deliver mail west. [7] However, the trail was rendered essentially obsolete with the development of the transcontinental railroad in 1869.

[1] This image is courtesy of the National Oregon/California Trail Center in Montpelier, Idaho.

[4] For more information on the early development of the California-Oregon Trail, read Robert Stuart's The Discovery of the Oregon Trail which discusses the trail in its relation primarily to the American states,and Richard Mackie's Trading Beyond the Mountains which discusses the British fur trade as it related to the Pacific coast.