The French Man on the Trail 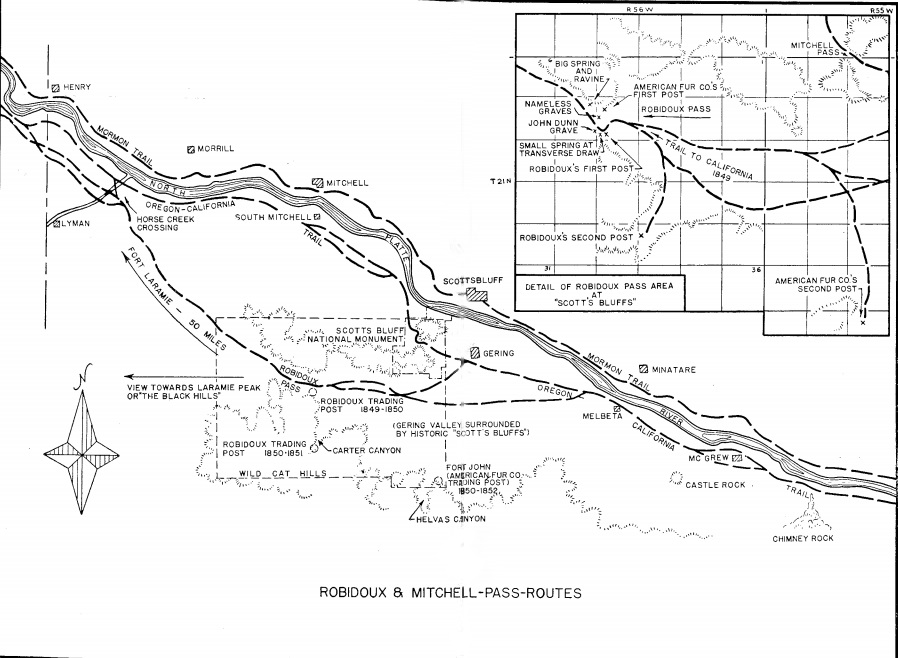 Various journal entries from a myriad of published primary sources account of a French man that lived around Scott's Bluff at a self-erected trading post. While the prices reported vary from person-to-person, the name of the French store owner remains phonetically similar - Robidoux. To this day, there is a pass in this region that exists under the moniker "Robidoux's Pass," and several people in the region claim their lineage from this family line.[1]

"Here we found a Frenchman name's Rubidu. Had been living here some 13 years -- sold whiskey 50 cents per pint, dark flour to the white man 50 cents per pound, to the Indian 12 pelts. Bacon 1 cent per pound and a first rate article. Indian wouldn't eat it and white man throwing it away." [2]

"At this place [near Scott's Bluff] a Mr. Roubidoux has established a trading post to trade with the Indians & to take advantage of the vast migration which invariably passes this point a number of mechanical shops (or tends rather) are here in operation during the season of the emigration." [3]

"There is a temporary blacksmith's shop here, established for the benefit of the emigrants, but especially for that of the owner, who lives in an Indian lodge, and had erected a log shanty by the roadside, in one end of which was the blacksmith's forge, and in the other the grog-shop and sort of grocery. The stock of this establishment consisted principally of such articles as the owner had purchased from the emigrants at great sacrifice and sold to others at as great a profit." [4]

"Below the spring in the ravine a Frenchman has established himself in a little cabin as a jack at all trades, BLacksmith, Shoemaker, Tailor etc., & keeps a little stock of groceries, hardward, etc. Some of his prices were amusing enough to us though not to the unfortunate traveler whose misfortunes compel him to refit here. Sugar 40 cents per lb, Flour & corn meal 8 cents per lb. Shoeing mules 2.00 per shoe, tin lantern 1.25. Yard muslin 40 cents, etc. etc." [5]

"There is a village of the Sioux Indians two miles above the crossing. And some 2 or 300 of them of all sex, ages & size were loitering round our wagons pretending to trade Mockisons & Skins etc. for something to eat... The Sioux Indians have never been hostile to the whites. We encamped about one mile abouve the ford, where we found good grass. There are some ten or a dozen Frenchmen liveing here in lodges or wigwams, withe Squaws for their wives." [6]

"The Sioux first moved south into the valley of the Platte in force during the 1830's. French-Canadian fur traders, often half-Indian themselves, had dwelt among them for a generation or more." [7]

"This morning early a half-breed Frenchman trotted into camp with a little cart made of some old wagon wheels & the sides of raw hide very light. He belongs to the establishment at the Cold Spring on the mountains & was going to Fort Laramie for a stock of goods. He spoke broken Enlighs & appeared to know nothing but to shoot his rifle, drive hishorse & make sharp bargains, still he was a very clever little fellow, active as a cat & helped us well out of a slough we had to cross, wading by the side of the mules & with his shard sudden yells scaring the animals into harder pulling than all our whips could have done... Our half breed travelled with us this forenoon then whipped up saying he must be at the Ft. tonight." [5]

4. Howard Stansbury. Explorations and Survey of the Valley of the Great Salt Lake of Utah, including a Reconnoisance of the New Route Through the Rocky Mountains. (Philadelphia, PA: Lippincott, Grambo and Co., 1852), 52.

5. Gold Rush Diary: Being the Journal of Elisha Douglass Perkins on the Overland Train in the Spring and Summer of 1849. Thomas D. Clark, editor. (Lexington, KY: University of Kentucky Press, 1967), 48-49.

6. The Overland Diary of James A. Pritchard from Kentucky to California in 1849. Dale L. Morgan, editor. (San Francisco: The Old West Publishing Company, 1959), 73.