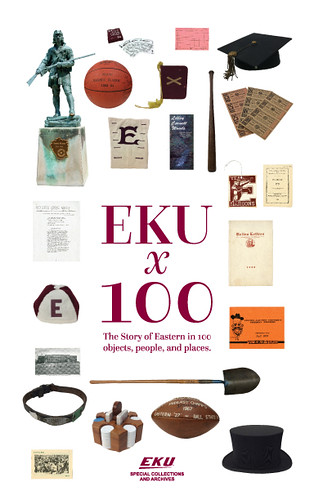 Experience Eastern in a New Way

What do a basketball from 1984, a statue of Daniel Boone, and a top hat have in common? Each one is a small part of the Eastern story, preserved throughout time in Eastern’s Special Collections and Archives. This exhibit highlights the story of Eastern through 50 objects and 50 locations.

From items pulled from our collections, you’ll discover stories like how Eastern became the Colonels (and not the Leopards). You’ll see how Eastern students stood up for their beliefs and marched in the streets. You’ll learn how the African American members of the University Ensemble created community and music during a tumultuous time in American politics. You'll also explore the story of Eastern through the campus itself. Find out how Elmwood became a part of EKU. Learn how a Great Depression-era program contributed to Eastern’s infrastructure. Uncover the story of a custodian in the Weaver Building who taught students how to box. You can explore the locations on this website, or, you can download the Clio app to access our EKU x 100 walking tour to guide you on your smartphone.

To get started, use the navigation pane on the left or click one of the the buttons below.  You can also read about the students who helped create this exhibit by here.

These 100 locations and objects are a few pieces of Eastern’s history, but the narrative is not quite complete. There are easily another 100 things that could be added to this list.