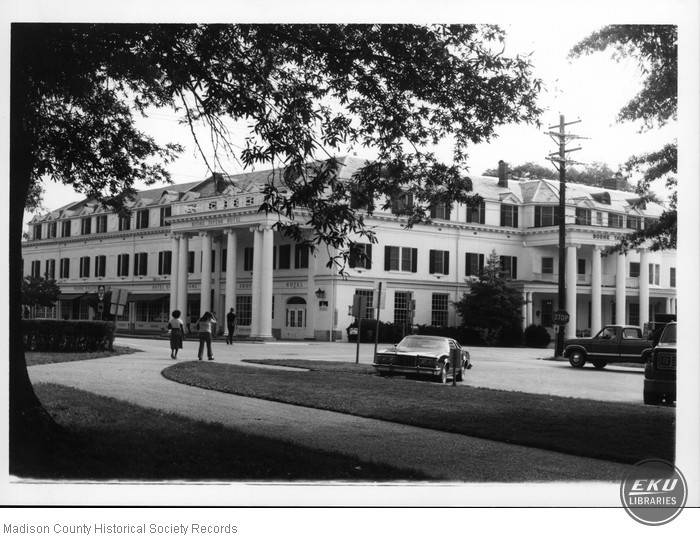 Boone Tavern, named in honor of Kentucky frontiersman Daniel Boone, stands along the original route of Boone’s Wilderness Road. Located next to Berea College , the inn opened in 1909 to provide lodging for visitors to the college. In 1910 a third story was added to accommodate more guests of the college as well as travelers on Dixie Highway (US 25). On the third story pedimented windows produce a dormer effect on the hipped roof. An annex was added in 1928 on Short Street to increase further the tavern’s facilities. The architects of the original portion were Cady and See of New York City, whereas George H. Gray of New Haven, Connecticut, designed the 1928 alterations.

Initially, the Colonial Revival style brick edifice had one entrance which faced south. The hotel presently has two entrances, one on the east facade and one on the west. Each entrance is sheltered by a two-story portico with Ionic columns. The west portico consists of paired columns and a lattice balustrade above the entablature. A denticulated belt course separates the second and third floors on both west and south facades. A single-story porch extends across most of the east facade, partially underneath the portico.

Inside, each of the fifty-seven guestrooms contains reproduction furniture handmade by Berea Student Industries. The College Fireside Weavers constructed the fabrics for the curtains, draperies, and upholstery. Oak paneling and an oak beamed ceiling complete a large meeting room appropriately called the “Oak Room.”

Boone Tavern, with a staff consisting mainly of college students, provides dining and lodging for its guests.