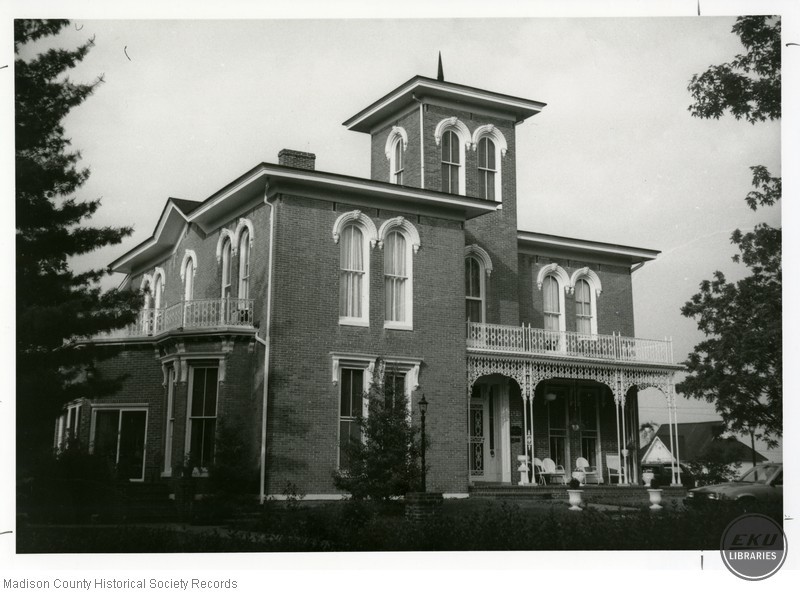 Blair Park is Richmond's most formal example of the Italian Villa style. It is also significant because the history of the house demonstrates a historical trend in its evolution from settlement period farmstead, to prosperous agricultural complex, to suburban estate, and finally to the subdivision of lands.

The site was first occupied by a double log house that belonged to the daughter of Col. David Irvine, the second clerk of Madison County. A new brick house, called Rosedale, was erected in 1869 on a thirty acre estate for Singleton P. Walters (1816 - 1885) who was largely responsible for the location of Central University (now Eastern Kentucky University) in Richmond and who served on its first board of trustees. He was also the president of a local bank and financed the Richmond branch of the L&N Railroad. A public spirited citizen, he liberally assisted in the advancement of Madison County. His name was given to the short lived preparatory school for boys, Walters Collegiate Institute, that use Central University's campus from 1901 to 1906.

At the time of its construction Mr. Walters's suburban residents was the only dwelling between Main Street and Tates Creek Road. A long driveway from West Main Street gave access to the house. The lawn was beautifully landscaped, and the grounds included a large greenhouse. Upon Mr. Walter's death in 1885, his daughter Hattie Walters Letcher (1847-1913) inherited the estate. She and her husband William R. Letcher (1845-1909) had the house and enlarged in 1887, creating eighteen rooms with halls and galleries. After resigning as cashier at the bank where his father- in- law had been president. Mr. Letcher entered into the horse-racing business and built a half mile racetrack near the house. Letcher eventually lost his wife's fortune, and in 1896 the family moved to Cincinnati, Ohio.

Eight years later prominent lawyer and bank president Col. James W. Caperton (1824-1909) bought the house and the sixty acre tract at public sale, renaming the estate Blair Park after his ancestral home in Virginia. After his death his wife Katherine Phelps Caperton (1866-1945) and his daughter Jamie Caperton, later Mrs. Paul Burnham, resided at Blair Park until 1919 when they moved to Amberley (MANW-18) on West Main Street. The development company that purchased the estate subdivided the land and laid out streets, calling the new subdivision Rosedale Park. The house and a half block of land soon sold for $8,670 to M.B. Baker, a landowner from the Newby community. Although the estate no longer extends to West Main Street, the carriage house and servants' quarters still stand on the property.

The house is constructed of brick and is five bays across and two stories high. A dominant three-story tower having a spire continues to the asymmetrical, picturesque quality of this facade that is characteristic of the Italian Villa style. A one-story cast iron ostrich with balcony ornaments shelters the entrance and two windows to one side. The frontispiece consists of sidelights and transom in leaded glass that is framed by wooden brackets and moldings. On the east side, another ironwork balcony surmounts a single-story polygonal bay and spans the remainder of the side facade. Scrolled brackets support the projecting lintels of the first-story sash windows, while the arched-shaped second story windows are topped with decorative drip molds. Brackets still support the projecting races above the polygonal bay, although similar ones have been removed from below the main hipped roof and from the tower roof.