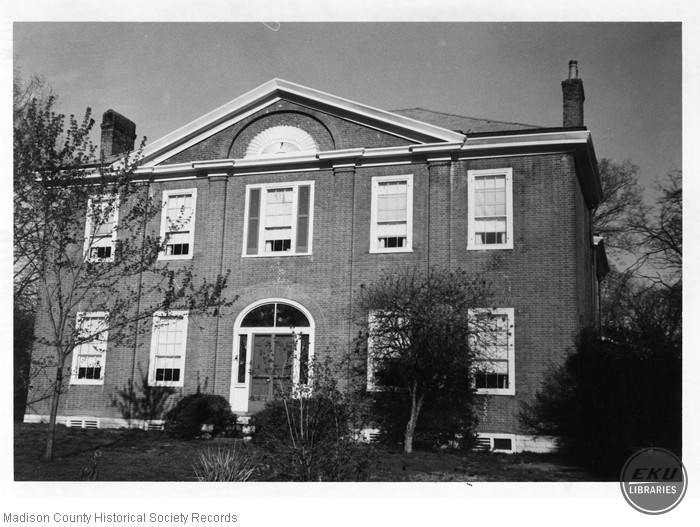 This Federal style residence was built on a plot of twenty acres of land for Judge Daniel H. Breck (1796-1856), a native of Massachusettes who had moved to Kentucky in 1814. His wife Jane Todd (1796-1856), a Kentuckian, was the aunt of Mary Todd Lincoln. According to local legend, Abraham Lincoln and Mrs. Lincoln spent the night here during a visit to Richmond. Besides being a member of the Kentucky Court of Appeals, Judge Breck also served in the Kentucky legislature and in the U.S. House of Representative. About 1880 the merchant D.M. Bright (1832-1896) purchased the house and named it Brighton. (See MAR-15) It was later the residence for many years of the Dr. J.G. Bosley family; Mrs. Bosley (nee Florie Bright) was the daughter of D.M. Bright.

Brighton is similar in exterior design to Bronston House and Blythewood; all three of the houses may have been designed by Matthew Kennedy. The symmetrical five bay facade has a classical pediment surmounting three of the five bays. A large sunburst, outlined in brick, ornaments the tympanum of the pediment. Brick pilasters extend below the pediment to the roof of the cornice and separate each of the nine-over-six sash windows. Tall interior end chimneys project from the low hipped roof.
The stair-landing window and the sidelights and fanlight around the double-leaf door contain stained glass which was added around 1890. The interior features include ash floors, Federal mantels, and cupboards with carved fans and paneled door facings.