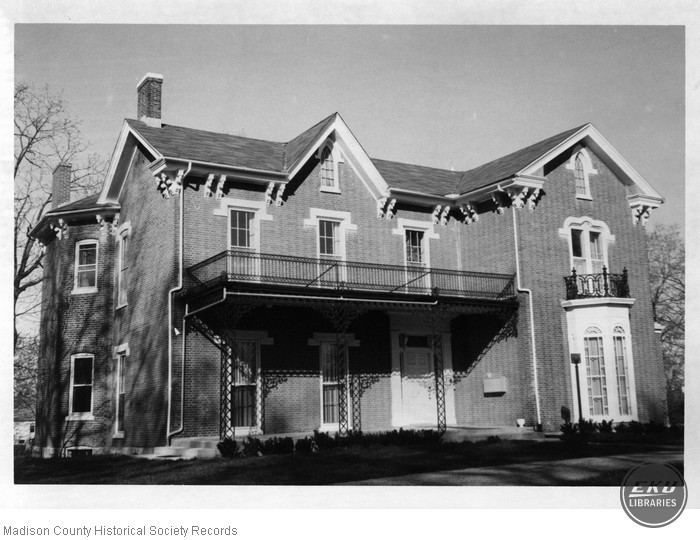 Erected for William Embry and his wife Mary Field, this house has been known as Burnamwood since 1868 when it was purchased by col. Curtis Field Burnam (1820-1909) and his wife Sarah Rollins (1825-1904). Col. Buram was a lawyer, a Kentucky state senator, and a strong Union supporter during the Civil War. As such, he was instrumental in preventing the state from seceding from the Union at the onset of the war and was received by President Lincoln in the White House. Since he secured pardons for Kentuckieans, Burnam was also respected by Kentucky Confederates. He later served as the first assistant secretary of the treasury under President Ulysses S. Grant. As a state legislator in 1906 he supported a bill that created two state normal schools for teacher training, one of which was located in Richmond and ultimately became Eastern Kentucky University. Although the house is basically Italianate in style, Gothic, Greek Revival, and Italianate elements are apparent in Burnamwood’s architecture.

The two-story facade with four bays includes a projecting bay window. Gothic pointed arches cap the attic windows, and dipstone moldings embellish most of the first-and second-story windows. The eaves of the roof are supported by paired brackets, with identical paired brackets supporting the returns in the gable end. A one-story porch of decorative ironwork adds to the Italianate styling of this structure. Approximately eight acres still surround Burnamwood, although the front acreage that once extended to West Main Street has been subdivided. Buramwood was recently donated by Mrs. George Burnam to the Louisville Presbytery with a sustaining endowment. Today, with immediate setting and grounds intact, it serves as retirement apartments.