Site of the first racetrack in Richmond, the cemetery was chartered in 1848 to replace an earlier one across Main Street. The property was first owned by Col. Humphrey Jones; a subsequent owner, Joel Walker, sold the original 18 acres to the Richmond Cemetery Company. At the insistence of Col. William Rodes, the first president of the cemetery board, a landscape gardener was employed for design and upkeep. As a result, the front section exemplifies mid-nineteenth-century cemetery design, features romantic and picturesque landscaping with hemlocks and other evergreens lining the curvilinear lanes. The first internment in the cemetery was that of Mrs. Daniel Breck.

In 1862 some of the Civil War Battle of Richmond was fought on these grounds, with many Union and Confederate soldIiers killed and buried here. Their remains were removed to Camp Nelson National Cemetery in Jessamine County in 1868, and a commemorative marker now stands on the burial sites. 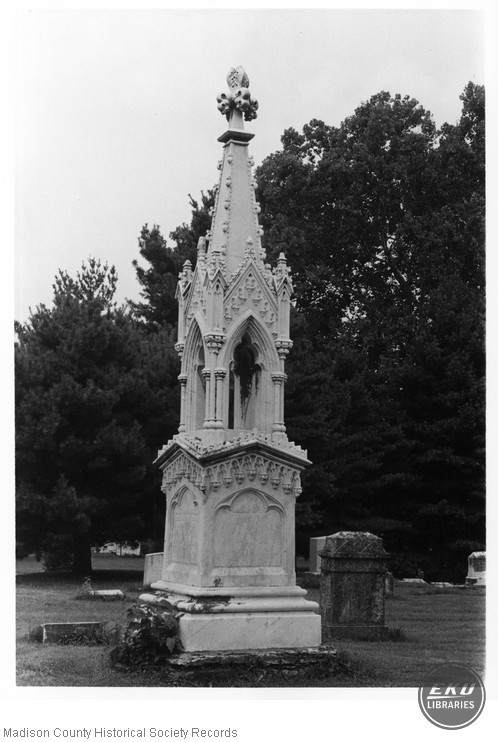 The present Main street entrance to the cemetery was laid out in 1897 by Dr. Lewis G. Barbour, a professor at Central University. It is not certain whether the stone gateposts and double iron gates were erected then or in 1908 when the iron fence that lies along Main Street was moved from Madison County Courthouse square and installed at the cemetery. Prior to 1897 the main entrance is reported to have been just west of the keeper’s house where the small pedestrian gate is now located. In 1953 an iron fence and gates were removed from the property of the Hume/McCreary House on Main Street and placed on the Summit Street side of the cemetery.

A stone and bermed receiving vault built in 1900 still lies next to the curved lane near the entrance, although it is no longer used.