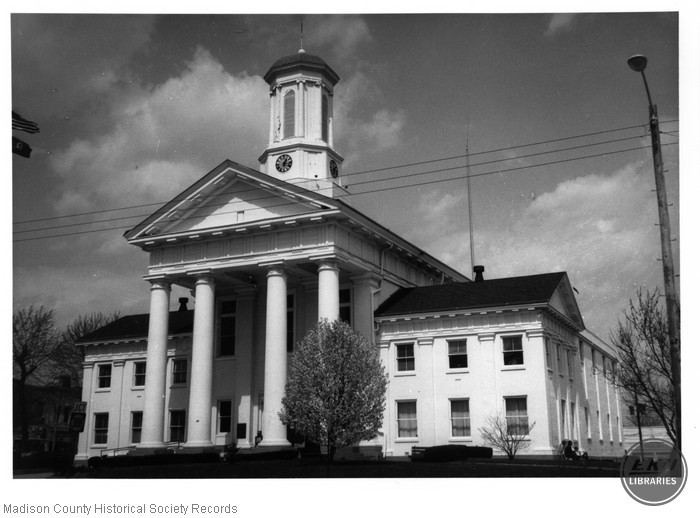 The Courthouse is an architectural variant on the Greek Revival temple form. Built at a cost of $40,000, the edifice is one of Kentucky’s noteworthy examples of antebellum public buildings. It was designed by Col. Thoumas Lewinski, the Lexington architect of Polish extraction who later designed the addition to White Hall for his friend Cassius M. Clay. As with many other Lewinski-designed projects, John McMurtry (1812-1890) of Lexington served as builder. Extensive alterations were made in the mid-1890s under the supervision of the Cincinnati firm of Crapsey and Brown at a cost of about $15,000.

The wooden fence that surrounded the courthouse square by 1855 was replaced by a Swedish-made iron fence which cost $3,000. For months after the Battle of Richmond, August 29-30, 1862, the fence was used to impound about 1,200 captured Union soldiers. The iron fence was removed to the Main Street side of the Richmond Cemetary (MASE-23) in 1908.

Except for the painted surface (which may not have been original), the replacement of small-paned sash windows with single-paned, and the removal of small one-story columner porticos from the center bay of each wing during remodeling in the 1890s, the front view remains essentially as it was when first constructed. The large-scale central block with pedimented portico remains. The frieze of prominent triglyphs unites the portico and main block with the wings, continuing uninterrupted around the sides over the lower roofs. The four columns supporting the portico represent the Roman Doric order and contain rosettes at the capitals. Pilasters extend from the walls of the front facade and around the wings, although reduced in scale on the wings. A clock-faced octagonal cupola sits back from the portico and over the central bay of the main block. The cupola is constructed of hewn timbers which are long and unbroken. These timbers are joined with mortice and tenon secured by wooden pegs.

Except for a marble and bronze staircase added in the 1890s remodeling, the interior has been considerably altered. The bandstand and an iron fountain that once stood in front of the Courthouse were sold for scrap in World War II. The existing fountain at the southeast corer of the courthouse square was presented in 1906 by Richmond native David R. Francis to commemorate early Kentucky settlers. A Missouri granite shaft once allowed water to flow from both sides. It supports a bronze bust which signifies a typical settler. Although the fountain no longer flows, it still bears the inscription “Drink and let thy cattle drink also.” To the rear of the Courthouse are located a jail and a jailor’s residence in the late-nineteenth century Italianate style.