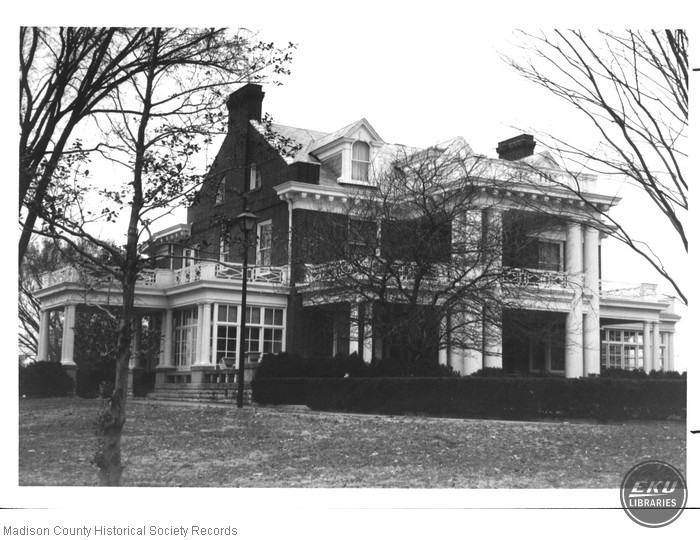 MASW-41
Lexington Road, Richmond
2nd Half of the 19th Century/1st Quarter of the 20th Century

Arlington was a generous gift to Eastern Kentucky University from W. Arnold Hanger in memory of his parents, Col. And Mrs. Harry Baylor Hanger. It presently serves as a faculty-alumni recreation center. The original house was constructed for Mr. Hanger’s grandfather Capt. William Arnold (1821-1905) sometime between 1866 and 1890. Capt. Arnold purchased for $34,000 in 1866 the 451 acres of land which comprised the original Arlington estate.

Local history indicates that, prior to this date, a log house stood on the tract to the east of the present structure. The house that Capt. Arnold built included Italianate embellishments on the trim. In 1893 his only heir and daughter Elizabeth (1870-1921) married Harry B. Hanger (1864-1925), a construction engineer whose company was responsible for building the Lincoln Tunnel under the Hudson River in New York.

After inheriting the estate in 1909, the Hangers added the three-story Classical Revival style front to the house. The original setting of the Arlington estate has been preserved in the 15 acres of rolling bluegrass bestowed to Eastern along with the house and the remaining 166 acres purchased by the Eastern Kentucky University Foundation. In the yard, even cut-stone dismounting steps remain, necessary in the past to assist passengers alighting from a horse-drawn carriage or rides from horseback. The structural fabric of the Classical Revival style house is brick, laid in Flemish bond. The three-story house is symmetrically arranged, flanked by two wings dating to the 1909 renovation: one is a carriage entrance on the east and a sunroom, now modified as a dining room, on the west.

Across the length of the front facade spans a one-story porch with a two-story central portico. The portico is supported by two pairs of massive Doric columns and capped by balustrades. Large, prominent dentils decorate the porch and cornice. A limestone foundation raises the first floor several feet from the ground. Across the three-bay front are two large limestone-silled windows on either side of a central entrance. A transom window and sidelights surround the entrance. On the attic story three gabled dormers with arched windows, flanked by pilasters, project from the slate roof. Lunette windows flak the end chimneys on the gable ends.