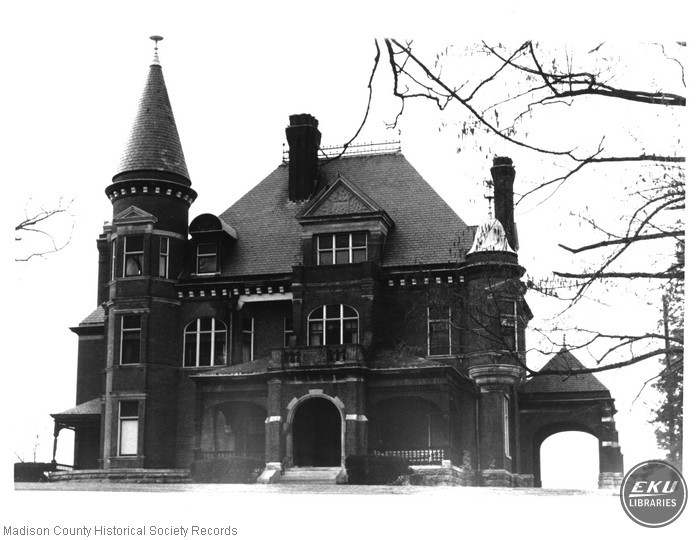 Elmwood rests far back from Lancaster Avenue in a forest-like setting. After making his fortune in Texas land and cattle, William Walker Watts (1836-1912), a native of Madison County, bought the site in 1881 from Maj. John D. Harris. (See MA-195) At that time the property was occupied by a double log house. Elmwood was built six years later for $35,000.

Named for the elm trees which stood on the twenty acres of land, the house is the state’s only Chateauesque style dwelling outside Luisville. It is constructed of pressed bricks which were fired on the premises and is said to be the first pressed brick house built in Madison County. The Watts House is one od four residences in Richmond designed by Samuel E. Des Jardins, a French Canadian architect from Cincinnati, Ohio. (See MANW-3, MANW-18, and MANW-22)

Above a raised limestone foundation, the entrance to Elmwood is recessed under an arched prjection. Porches with bulbous wooden turnings, painted glossy black, flank the entrance. The steps leading up to the oak double-leaf entry door are engraved with the words “William and Mary Watts” and “A. D. 1887.” A “porte cochere,” or carriage entrance is located on the north facade. On the back, or west facade, a polygonal two-story bay incorporates a chimney, its flue divided on te first story by a stained-glass window. Other windows are squared, arched, transomed, pedimented, or a variation fo the Palladian type, many with leaded or stained glass. The window sills, as well as the keystone in the arched entryway, are made of sandstone.

The multi-planed state roof is a high-pitched hipped type with copper roof crestings and copper gutters. The overhanging eaves are supported by wide brackets. A three-story conical tower with a copper finial projects high above the roofline, as do the corbelled chimneys. 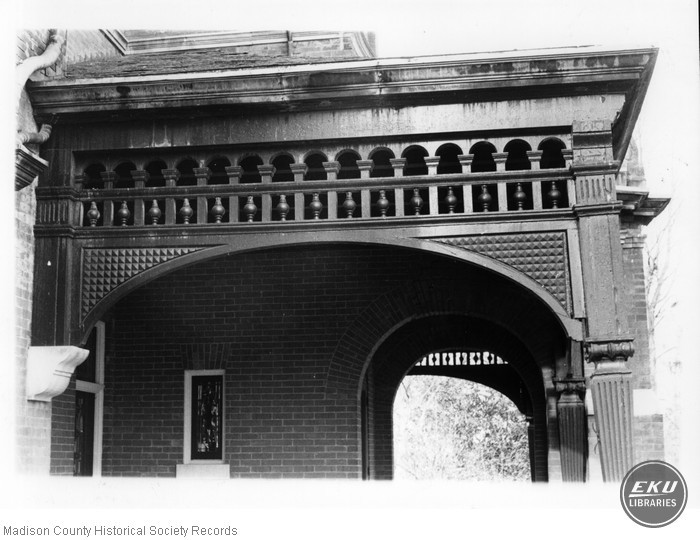 The interior of the three-story structure is asymmetrical in plan with approximately 9,000 square feet divided into fifteen rooms, each furnished with English and American antiques. Excluding the maid’s quarters, attic, and cellar, there are five bedrooms, a library, dining room, kitchen, parlor, and several sitting rooms; yet, much of the floor space is consumed by passages. A gold, orange, and red stained-glass window is located at the landing of the wide U-shaped staircase. The golden oak staircase is over six feet wide and features a wide-planed banister with three variations of intricately spiral-turned balusters. The dining room contains the fireplace with the split flue; at the split the inset of stained-glass is reflected in beveled mirrors, set above and on either side so as to multiply the effect.

Emma Watts (1887-1970), daughter of William and Mary Watts, was the last person to reside in Elmwood. Today, the house and grounds continue to be maintained through a trust established in Miss Watts’ will. A formal boxwood garden enclosed by a brick wall, naturalized daffodil beds, ponds, bridges, and large evergreens still cover acres of rolling lawn. Remaining outbuildings include a stable, carriage house, smokehouse, barn, and a caretaker’s cottage.