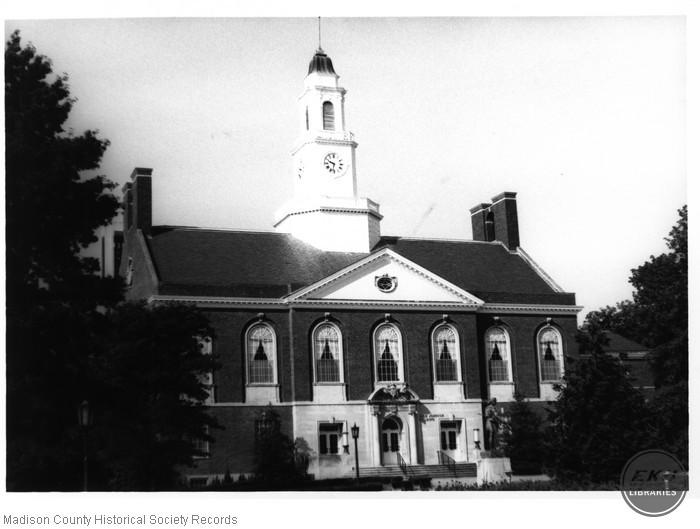 This Colonial Revival style building was originally the student union at Eastern Kentucky State Teachers College. The brick two-story edifice was designed by C. C. Weber, constructed by the Works Progress Administration, and named for Keen Johnson (1896-1970), governor fo Kentucky from 1939 to 1943 and regent of Eastern from 1936 to 1946 and from 1954 to 1956. (See Mar-70) It is now used as the university’s faculty club and as a facility for receptions, banquets, and conferences.

The design for the large-scale projecting pedimented pavilion with three double-leaf doorways was inspired by the Governor’s Palace in Williamsburg, Virginia. A scrolled pediment is set above the large central door, and engaged Ionic columns frame the doorway. Seven tall arched windows on the second story provide light to the ballroom within. The slate roof with double exterior end chimneys is surmounted by an octagonal balustraded cupola with clock.

The interior of the Keen Johnson Building contains the only example of Art Deco styling in Richmond. Walnut Hall on the first floor expresses this twentieth-century style in several features, including two identical, white marble-faced fireplaces at each end of the lounge. Mirrors above the fireplace openings reflect the long, high-ceilinged space. The walls are paneled in book-matched walnut veneers. Four curved marble steps with brass railings lead down to the herringbone-patterned parquet floor. The second floor is dominated by a marble hall, once the student dining room, where approximately 1,000 people can dine. Double rows of black columns eighteen feet high support a barrel vaulted ceiling. Cream and gray marble covers the floors and walls.