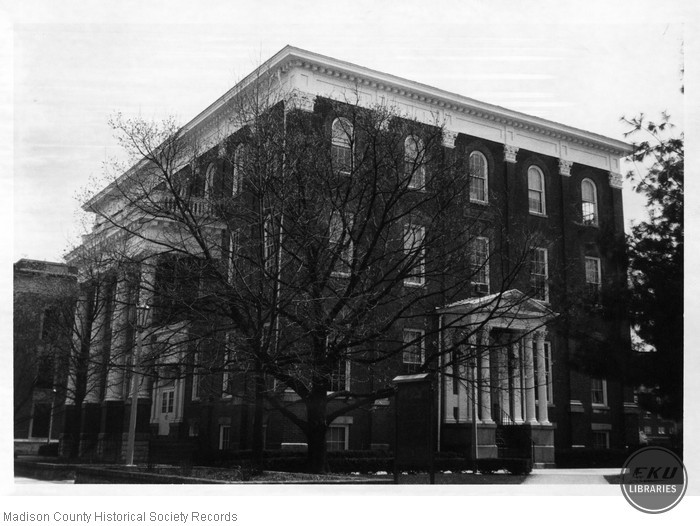 This three-story Italianate structure was designed by Cincinnatus Shryock, son of early Lexington architect Mathias Shryock (1774-1833) and brother of Gideon Shryock, architect of the Old Capitol building in Frankfort. Constructed at a cost of $30,000, the University Building, as it is called today, was the first structure on the Central University campus. The brick for it was made and fired in a kiln located fifty or sixty yards west of the site of construction. Originally facing Lancaster Avenue and on spacious grounds, it commanded a view of the countryside and mountains to the southeast.

A stone marker over the main door records the date, “1874," and Central’s motto, “Lex, Rex-Crux, Lux,” or, “The Law is the King–the Cross is the Light.” On the north side of the building stands a three-bay two-story portico. Fluted Corinthian columns support an entablature and balustrated roof. Paired brick pilasters flank the main entrance door, their leafed capitals repeating the Corinthian order. Smaller pedimented porticos on the other facades also feature Corinthian columns. A denticulated cornice and paneled frieze emphasize the building’s flat roofline. Although the original hood molds above the windows have been removed, the three-story brick pilasters with white Corinthian capitals remain.

In its long history the University Building has served many functions. The model teaching school occupied the quarters from 1906-1909 and again from 1930 until 1960. Today it serves as a classroom facility.