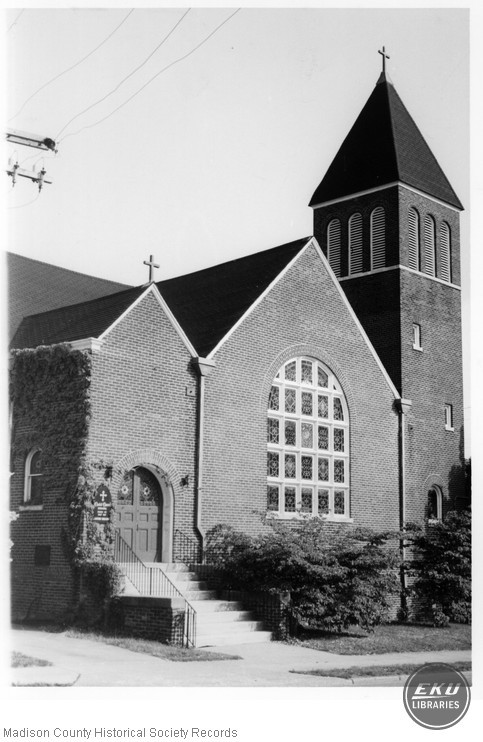 Founded in 1871 as a mission, the Episcopal church in Richmond was originally a small white frame building at the corner of West Main and Tates Creek Avenue. The present site of Christ Episcopal Church was purchased from the adjacent Baptist Church for $1,000. The building, consecrated on June 19,1887, is the oldest standing house of worship still in use in Richmond.

Gothic in design, the two-story brick edifice has a steep roof with four gables and a steple tower. A circular brick-walled garden is located to the side of the church structure as a memorial to ten parishioner who dies in a 1972 plane crash. A flight of massive stone steps leads up from the avenue to a medieval style doorway. Opening into an anteroom the doorway contains stained-glass panels in the arched double-leaf doors.

From the anteroom two doors open into the square-shaped sanctuary. Four large stained-glass windows form the focus of the interior, each of them imported from Europe and nationally famous. The value of the windows behind the altar is estimated to be $240,000. A variety of woods were used in the sanctuary, including ash pews with walnut trim, oak panels in the ceiling, cherry wainscoting, and walnut door frames. The marble baptismal font at the rear of the sanctuary was given to the church in 1889 by J. Stone Walker in memory of his wife.