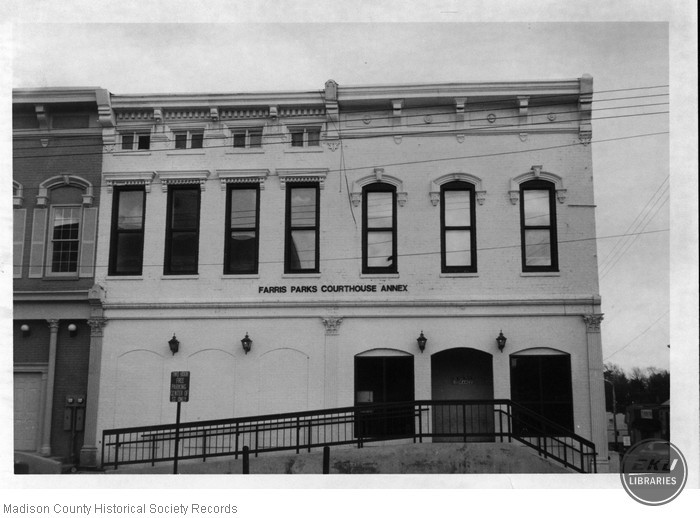 These buildings originally had the same facade as the two adjacent buildings on First Street . Having been adapted as an annex to the Courthouse , they have been painted white to match that structure. The large metal bracketed cornices at the roofline and the three metal Corinthian-capitaled pilasters on the street level are evidence of the original Italianate detailing, whereas the brickwork and the simplicity of the arched bays are in keeping with the Courthouse across the street.

Architrave molding spans the width of the facades of both buildings. Although the roof cornices are similar on both, the building on the left contains small casement windows that alternate betweeen the brackets. Flat hood molds surmount its four second-story sash windows, while the corner building contains three second-story segmental-arched windows with drip molds.

The corner site was originally occupied by Col. John Miller’s tavern, a log house, which by 1801 served as the first hotel in the county. Later it was renamed the Francis House, since it was the birthplace of David R. Francis (1850-1927), mayor of St. Louis, governor of Missouri, and ambassador to Russia. In 1871 the Francis House burned, and a few years afterwards the present structure was built and owned for a number of years by Elizabeth Irvine who lived at Irvinton.