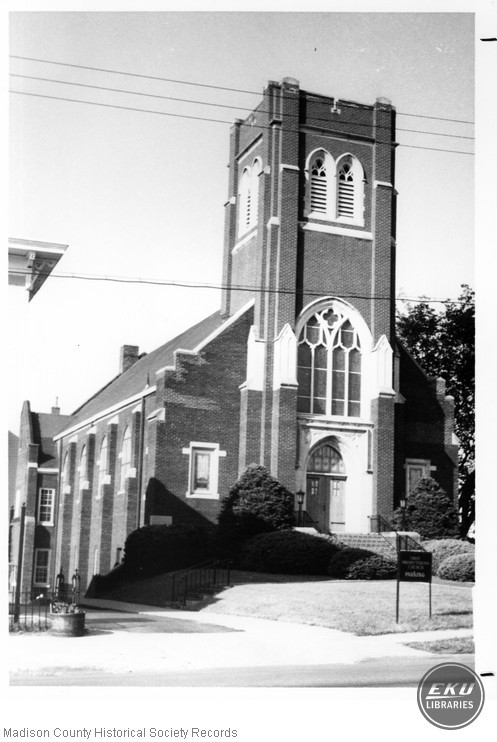 The First Presbyterian Church was organized in 1827. The original building was erected on this site in 1828, making it one of the first churches in Richmond. The present brick structure, the church’s third building, was constructed in 1921. The Nevin architectural firm of Louisville designed it, and Selden-Beck Construction Company of St. Louis served as general contractor. The cost of construction was $85,000.

The Gothic Revival style is strongly represented in both the exterior and interior designs. On the outside the major feature is the central tower which rises upward from a steeply gabled roof. Near the top of the tower are double vents outlined by Gothic stone arches. Decorative stone similarly enriches the exterior buttresses along the sides and the double doors on the front facade. A large pointed-arched stained glass window above the doors incorporates Gothic tracery and quatrefoils.

Inside, a wooden hammer-beam truss across an oak-lined cathedral ceiling dominates the sanctuary’s scheme. The low wainscoting on the side walls repeats the same dark wood. Above this wooden lining are large stained glass windows.