This Queen Anne style house was built for Pattie A. Field Clay (1848-1891), daughter of prominent merchant Ezekial Field, as a present to her husband, Brutus J. Clay II, the son of Cassius M. Clay. The architect of the house was Samuel E. Des Jardins, a French Canadian who worked in Cincinnati, Ohio, from 1882 to 1916. The Clay House is the first of the four residences in Richmond which he designed. ) Bricks used in the construction of the house were reputedly made from clay found on the property, while old bricks from an earlier house on the site were reused in the cook’s cottage and carriage house.

Lewis N. Neale, Sr., a prominent landowner and saddlebred horseman, became the second of three owners of this house in 1912. He had the brick and stone gateposts constructed in 1921. The bricks for this addition were reputedly taken from the old First Presbyterian Church structure when it was replaced by a newer building in 1920. 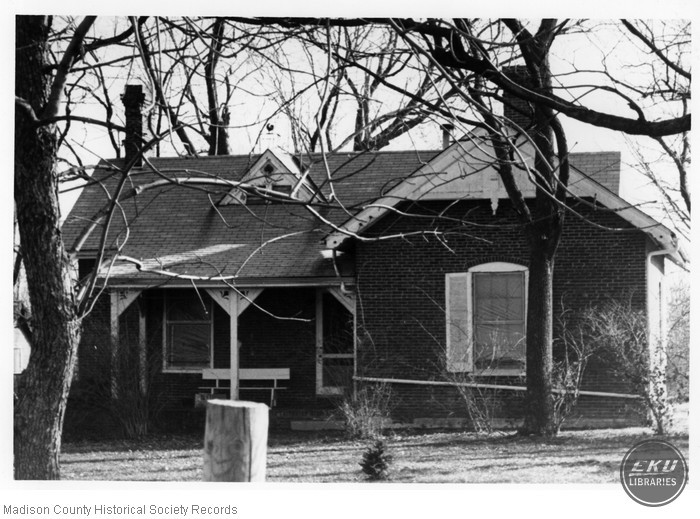 The exterior of the two-and-one-half story brick dwelling exhibits many features of the Queen Anne style. Its massing is asymmetrical and its roofline complex, having both gable and mansard forms. The roofing material is slate, with multicolored tiles lending a striped effect. Stone was used as decorative accents contrasting with the brick walls; sandstone appears at window openings and at other places on the walls, while limestone forms the foundation. A one-story wrap-around porch and a recessed second-story porch add to the building.

In the interior ceiling heights are 16 feet on the first floor and 14 on the second. A stained glass window is located at the turn of the stairway. The use of different woods creates a variety of textures; the floors are pine, the door butternut, and the trim walnut. Each room originally had its own coal grate. An unusual feature of the house is an elevator, now modified, which gave access to the servants’ rooms on the third floor. Fifteen rooms, including the five servants’ rooms on the third floor, comprise Lynwood.