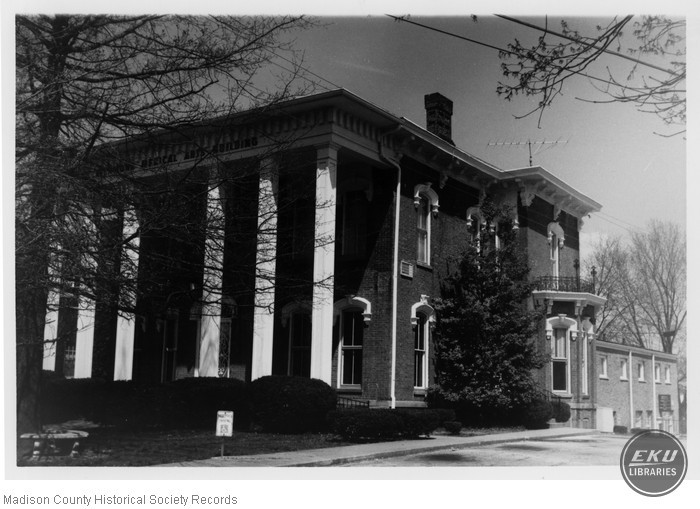 This structure was built for William S. Hume (1832-1895), owner of Hume Distillery on Silver Creek. Later, James Bennett McCreary (1838-1918) resided here until his death on October 8, 1918. Besides the distinction of severing two separate terms as governor (1875 and 1911), McCreary was also a state representative from 1902 to 1909, and author of the act that established the Department of Agriculture. He began practicing law in Richmond in 1859. After the Civil War Battle of Richmond in 1862, he joined John Hunt Morgan’s men on the side of the Confederacy, commanded a regiment in the Ohio raid, was captured , but later fought in Virginia. McCreary County in southeastern Kentucky is named for him.
After Gov. McCreary’s death the house was for many years the residence of the family of Thomas E. Baldwin, Sr., including his daughter Mrs. Carlos B. Brittain, wife of Rear Admiral Brittain (1867-1920). Their so Thomas Baldwin Brittain, following the family tradition, became a vice admiral in the U. S. Navy.

Despite the loss of an original tower, the Hume/McCreary House displays many Italianate details. The two-story brick building consists of the typical projecting bays, a low-hipped roof with overhanging eaves, decorative brackets, and tall segmental-arched sash windows with drip molds. An original arcaded one-story porch with decorative ironwork trim has been replaced by a two-story pillared portico. The central double-leaf doorway, flanked by two windows on each side, leads into a double-pile central hall plan. An example of adaptive reuse in Richmond, the McCreary House now serves as a medical building with doctors’ offices.