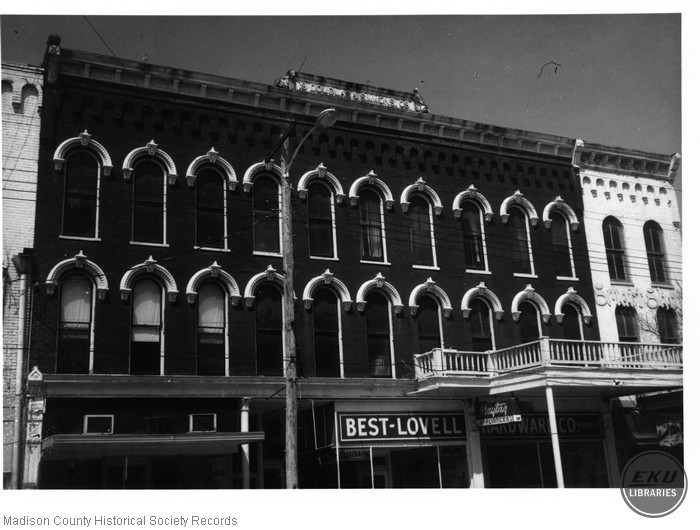 Built in 1871, this downtown edifice was first called the Ideal House, then Hotel Zimmer, and later St. Charles Hotel. By 1879 its name had once more changed to the Garnett House. The hotel reportedly contained many rooms when built and was one of the most popular resorts in Kentucky. The hardware firm of Douglas and Simmons bought the building in 1909 and opened their business in 1910 in partnership with Mr. J.W. Deatherage (1861-1944).

The three-story brick structure with a broad façade is the same height as the adjacent building on the corner of West Main and Second Streets. The construction and decoration of the building facades on Main Street are continued here in stamped-metal windowhoods, cornice, and brackets. Below the applied metal cornice, a brick corbel table forms blind arches that match those on the two adjacent buildings.

An iron balcony which ran the length of the second story has been removed and partially replaced with a wooden one spanning only the right side. The lower façade retains at the entrance one original iron column with an acanthus leaf capital. Cast iron pilasters remain at the corners of the building. Other decorative materials in the Douglas and Simmons Building are mosaic tile in the entry and pressed tin in the interior ceiling. The building currently houses several business establishments, including, as in the past, a hardware store.