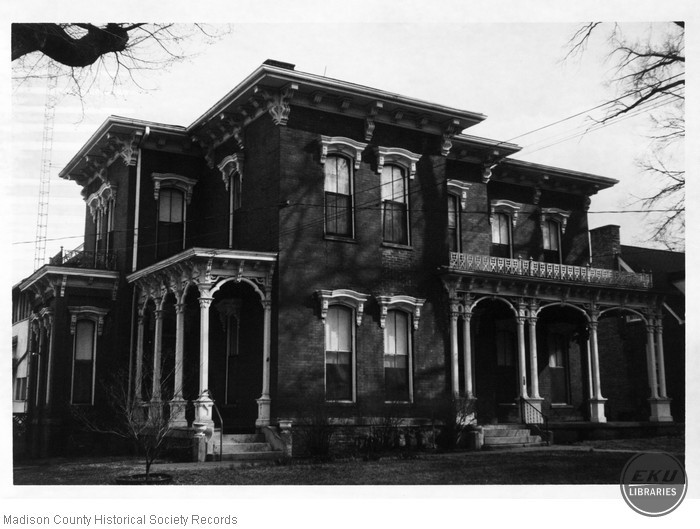 This double-pile brick structure represents one of Richmond’s best examples of Italianate style architecture. Bracketed window hoods surmount long, narrow windows which have segmental arches on the upper sashes. A low hipped roof ends in a heavily bracketed, projecting cornice, above a molded frieze. An asymmetrically-placed porch contains paired columns and a balcony of decorative ironwork. Hood molds similar to those over the windows surmount the double-leaf door that leads into a central hallway. Another small one-story porch, also consisting of ornate ironwork, provides covered access to a side entrance. The Walker House was built for J. Stone Walker (1842-1913), an influential financier and president of a Richmond bank. Walker also served as a member of the Board of Trustees of Walters Collegiate Institute. The house was later owned by John B. Parks (1844-1913), a brother of Mrs. W. W. Watts of Elmwood. It subsequently became the residence of Mr. and Mrs. Thomas H. Collins, and Miss Belle Bennett spent the last several months of her life there with her niece, Mrs. Anne Bennett Collins (1876-1943). The house has been converted into an apartment building.