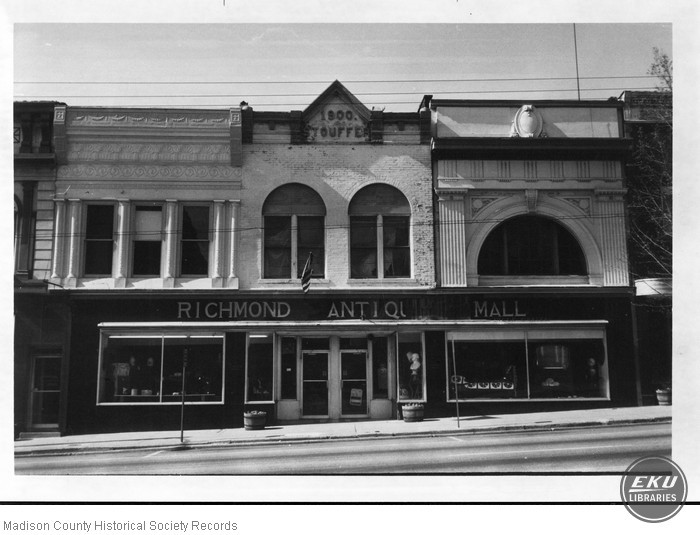 Although these three buildings originally served different commercial purposes, and each one exhibits individual details, they have been used as a single building in their recent history and are therefore discussed together here. The Farmer’s Bank Building includes a large keystoned semicircular window centered in a stone facade and flanked by fluted pilasters. A dropped entablature contains a neo-classical frieze with triglyphs and metopes and a denticulated cornice. A large cartouche above the entablature adds to the facade’s centralized quality. The Farmer’s National Bank was organized in 1865.

The J.B. Stouffer Building originally housed a men’s clothing store. It is also a two-story building with a centralized facade. A gable contains the name and date of the building. Double arches span the rectangular inset windows. Stamped-metal brackets and cornice contrast with the simple brick facade.

MAR-13 is also a brick two-story structure with a painted facade. The upper story consists of an embossed metal facade. A festooned cornice is flanked by end brackets having fleur-de-lis motifs. Engaged columns alternate between three sash windows. Below them, a frieze contains shells, fluting, and a vincean pattern. The building served as a grocery and hardware store in 1886. All three buildings were used as a single department store from 1933 until recently when they became an antique consortium.