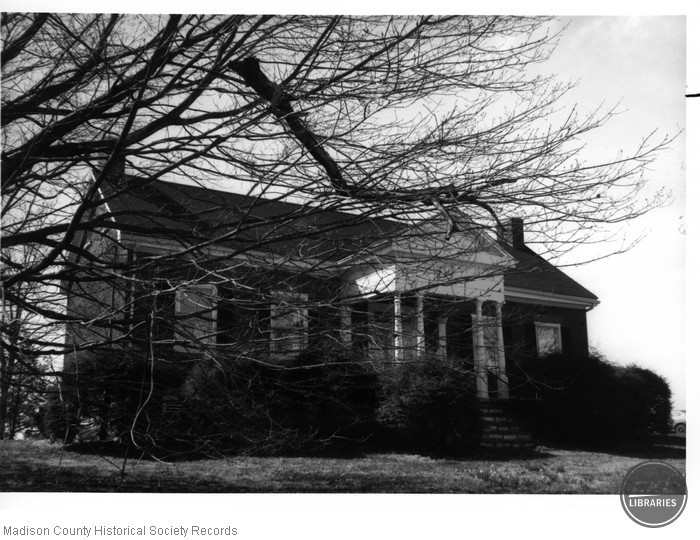 Some fifty years before the house was built, men from the surrounding area gathered at this site and chose it as the most suitable place for the county seat which they named Milford. It is believed that the front of the property was the location of County Magistrate George Adams’ house, where the first county court was held when Madison County was officially recognized on August 22, 1786. The first owner of the house, John Campbell, and Hugh Campbell reputedly constructed the Milford courthouse.

Brick for John Campbell’s one-story residence was fired on a small knoll in front of the house. The walls are laid in Flemish bond on the front facade with jack arches above the windows. Interior end chimneys extend above the gable roof. The floor plan is single-pile central passage with an original single-room brick ell to the rear. The stone foundation with wooden basement vents elevates the first floor. The pedimented porch, a later addition to, frames the central doorway which consists of a double-leaf door, transom, and pilasters. The two doors are double “Christian” doors, each having two crosses and four pages.

Although each room contains a fireplace, an unusual Adamesque mantel, with a sunburst motif in its frieze, adorns the brick fireplace in the parlor. The floors are constructed of random-width ash, and the woodwork, including chair rails, is made of poplar and walnut.