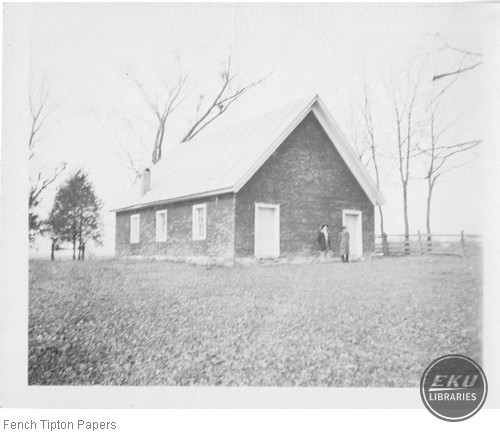 This Baptist church is one of the oldest existing houses of worship in Madison County. Organized on Muddy Creek in August 1803, the congregation was originally known as the Baptist Church of Christ. Elder David Chenault (1771-1831), a prosperous farmer on whose land the church was located, served as minister until 1830 when he began pastorial duties at White Oak Pond Church. (MA-184). (See MA-237.)

Today the exterior of the church building appears almost the same as it did when constructed in 1812. Part of its architectural significance is derived from the identifying feature of double entrance doors. (See MA-75, MA-92, MA-184, and MA-237.) Placed near the sides of the gable end front, these doors are surmounted by jack arches. The white box cornice under the eaves contrasts with the red brick walls The brickwork is laid in common bond on all of the exterior wallk, having headers exposed after every seventh course.

Inside remains the original oak pews, altar furniture, and a pulpit. The pulpit was formerly near the front entrance and was later relocated near the rear. Outside, the spring after hich the church was naned still flows.