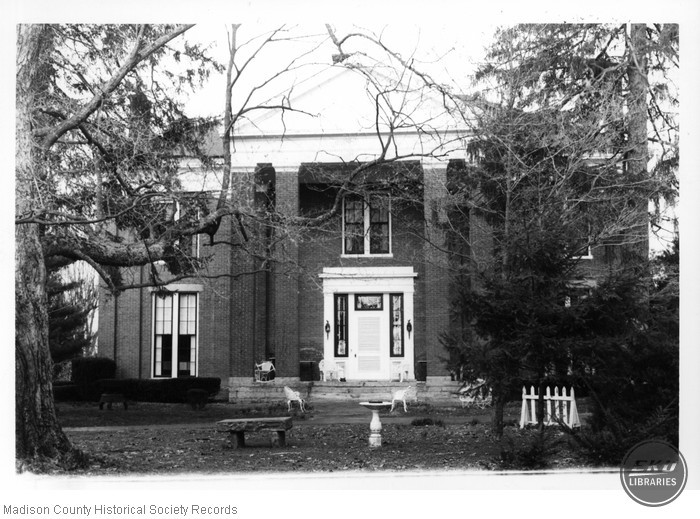 Now known as Bernard Hall Farm, this structure was built in 1812 by David Crews (1740-1821), a Revolutionary War veteran, an early inhabitant and trustee of Boonesborough, ferry operator, and tobacco warehouse inspector. The original Federal style structure can be seen west of the main block. Designed in the hall-parlor plan, the two-story house has six course common bond brickwork with jack arches over the windows. The original porch, which faces north, is now enclosed. 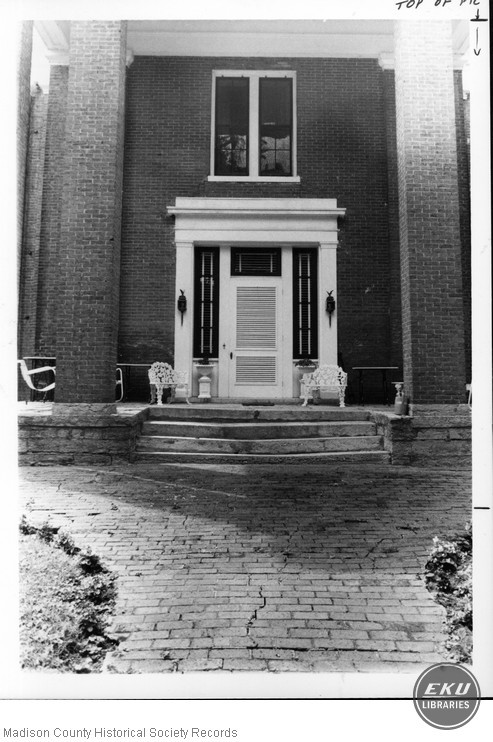 In 1840, successful farmer and financier Samuel Bennett (1805-1888) and his wife Elizabeth Chenault Bennett (1815-1897) had a large Greek Revival extension added to the dwelling. They named the house Homelands. The eight Bennett children achieved prominence both statewide and nationally. One son, James Bennett (1839-1908), married Sarah Lewis Clay (1841-1935), Cassius M Clay’s daughter (Homelands adjoined White Hall). The youngest son became a lawyer and a state senator, while one daughter was a noted church worker for whom Sue Bennett College in London, Kentucky, is named. The remaining daughter, Belle Harris (1852-1922), became known nationally and internationally for her work in the Methodist brotherhood and as an activist in the Woman’s rights movement. After Me. Bennett’s death in 1888, Mrs. Bennett and her two daughters, Sue and Belle, moved to Richmond.

Homelands is a representation of the Greek Revival style. It is two-stories high and has a central passage plan that is two rooms deep and much larger than the original house. The front or east facade is laid in common bond, while the north and south facades are double stretcher Flemish bond. Beneath the hipped roof a full entablature with a deep boxed cornice extends the full width of the facade. Pairs of squared brick columns support the dominant two-story pedimented portico. Paired Doric pilasters, rising the full height of the three-bay facade, frame each of the narrow paired windows. These elongated bays have stone sills and lintels.